A break in the weather allows for Harriet to go out into the garden and Amelia to go out onto her deck, which has been enlarged by a few more fencing panels. We realize that some of our friends are in snow storms and what passes for a storm on the central California Coast would constitute a break for them, we do realize that........ 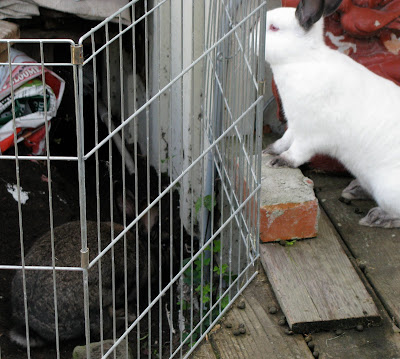 Amelia wonders what Harriet has found
to do on the other side of the fence.
Investigation reveals a major project underway. 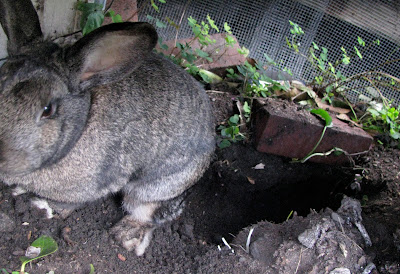 Harriet asks what how we like her earthwork.
Epilogue: the bench under which Harriet chose to place her art project was moved and the hole filled in. It was explained to Harriet that this was for her own safety because the tunnel construction was unstable and could collapse. She took this in stride and stretched out luxuriously in the soft damp earth. Later she had to get her white mittens washed.....

Amelia is quite, quite, quite fond of being petted. If Tyler is getting his pets she will dash over and insert her head as close to his as she can. In this little movie you can see what is a usual occurrence around here. This short also features Sydney jumping over her brother!
Since Harriet is in a pen I try to let her out into the garden everyday for awhile if weather permits. She is pretty good about coming in and hasn't tried to get away. But don't think I'm not constantly checking on her. She has started a digging project that may have to be curtailed before she gets under the deck. Her paws got so muddy from her last last work detail that I had to wash and dry them, much to her dismay. In the next short she is checking our our fallow garden beds where I dump the rabbits poops. Don't miss the very end part where she flicks her butt and sprays urine!
Harriet is wondering when she will get out of jail. In true Harriet fashion her spay date has been changed three times. The good news is we have a certificate to pay for more than half AND our favorite vet, Dr. H., with whom we have a long relationship, will do the surgery. She is so good with the anesthesia and makes very small low incisions, so we hope for a quick recovery. Additionally Dr. H. wants a rabbit print as payment for Harriet's exam, OK, I think I can manage that.... 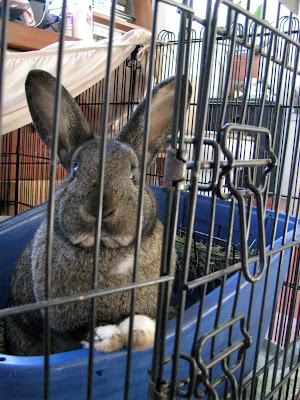 And when Harriet has recovered we can try some four way bonding.
Posted by d. moll, l.ac. at 12:41 PM 18 comments: 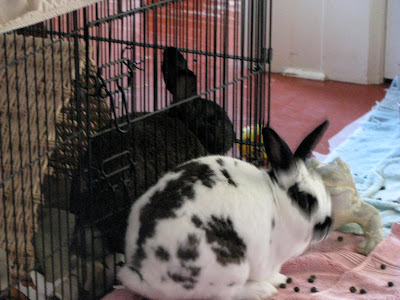 Harriet shadows the spotted Syd.
Nobody has called about Harriet. It seems that she is, if we can integrate her, one of the gang here at the Rabboratory. She'll go in for her spay next week and then after an as yet undetermined recovery time, I'll try to bond the four of them....I'm thinking I should try introducing them, without fencing, one at a time; preferably in a neutral spot like the bathtub or a pen outside. 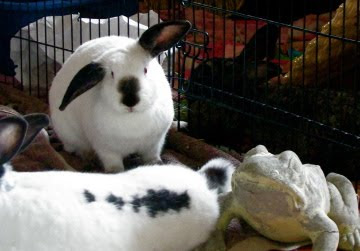 Tyler and Harriet lounge while Amelia shows concern for
the difficulties of photographing a very dark rabbit.
Since she has been here Harriet has been in a pen where everybun can see her and interact with her through the bars. There has been a little boxing and and the only time there was much upset was when she was in the kitchen and Tyler was in the Rabboratory; everything was wrong and they each blamed the other. There has been lots and lots of pooping and peeing on both sides of the fence. When she first arrived it had seemed like Harriet would be the queen of box habits, but now that she feels she needs to demarcate her space, she's got both barrels blazing and the other rabbits aren't much better. 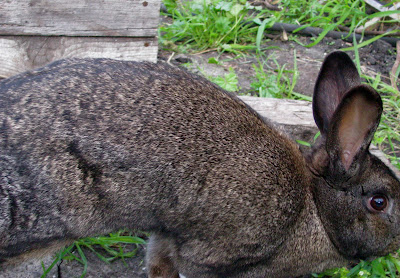 Harriet on a bun-errand.....
Often all rabbits are quite relaxed and I have them close while eating. There has been flopping on both sides, a good sign! Harriet gets to go out in the yard with supervision. Here she seems to have a set pattern of places she needs to go and things to chin, so far she has not deviated from it. When I need to get her in I herd her into the kitchen and pick her up there, she'd rather not be picked up outside, it's humiliating. 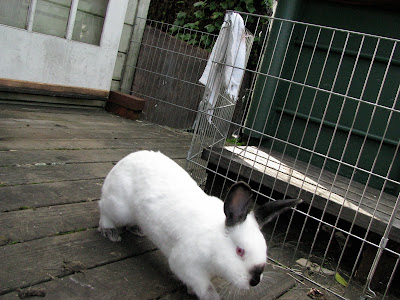 Amelia loves to go out on the deck and thinks
she ought to be allowed into the garden too....
Have a good week!
Posted by d. moll, l.ac. at 7:56 PM 22 comments:

Harriet can be a bit of the trickster, she is so dark that sometimes I can't see her in her pen and I am sure she was done a Houdini. She is able to scramble over the three foot Xpen, so I have to pin a sheet over the top. There were some exciting night time escapes and forays into the living room, stronghold of the Spots, before this technological innovation was in place. 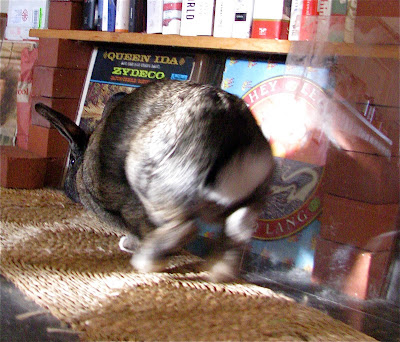 Hopping when she can.
Today there were some mix-ups involving Harriet. When I brought her to the vet last week Dr. H. was concerned, and rightly so, about performing a spay on a rabbit that might be someone else's. She asked that Harriet be registered as found with County Animal Control for a waiting period of two weeks. I dutifully did this the very same day. On Friday Dr. H's office called and left a message asking to schedule her spay. So today I called and spoke with C. and told her the story. When C. relayed the story to Dr. H. she left out enough for Dr. H. to think I'd surrendered Harriet to Animal Control. "Diana would never, never do that!" she said and had B. call me back for clarification; A little mix-up; we were all relieved to find I wasn't behaving out of character. 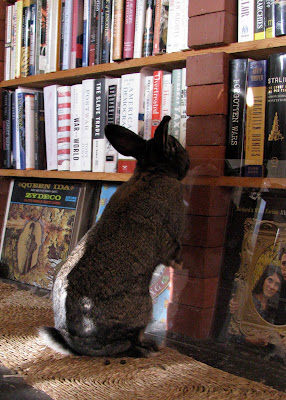 Harriet chooses a book to take back to her pen.
Because Harriet is in a pen I try to bring her out often to stretch her legs. The kitchen has a good straight run in it and I've rabbit proofed the back yard enough that with supervision she can go out there. Today it was a particularly fine morning so I took Harriet out in the yard while I pruned a rose tree. I followed her around a while and saw she was going to all the places she went the day before. Everything seemed quite stable, I kept my eye on her. I turned my back to do something or other and she was gone. Vanished into thin air. I looked everywhere. I could just imagine what the BF would say because I had been saying I thought she wasn't going to make a break for it and would stick around. Thinking she might have breached the side barrier and gone out front I went into the kitchen on my way through the house. Who comes racing out of the back room with Amelia on her tail, yes, it was the run away rabbit. Harriet had hopped up the steps and into the kitchen, which she knew well and returned to her room to "visit" with Amelia......... 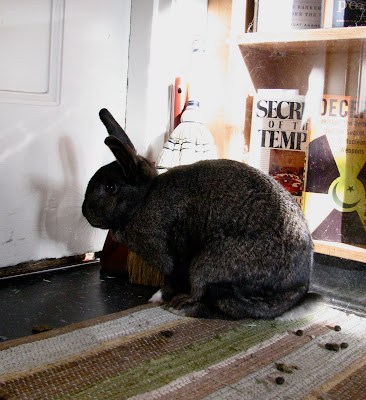 With a whole kitchen to explore the most interesting thing is still of the other side of the door.
Posted by d. moll, l.ac. at 1:53 PM 19 comments:

Tyler was complaining that he hasn't had adequate face time on the blog and that we finally had some light so couldn't I take some pictures of him? After he saw them he thought he ought to go get a job as a male model, apparently he has forgotten how devastatingly handsome he is. 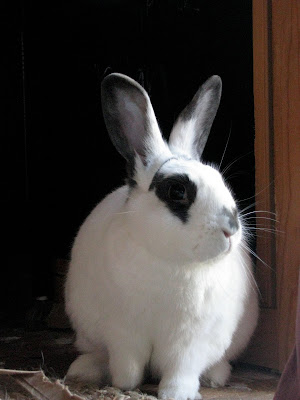 Look me in the eye and deny me anything, I dare you! 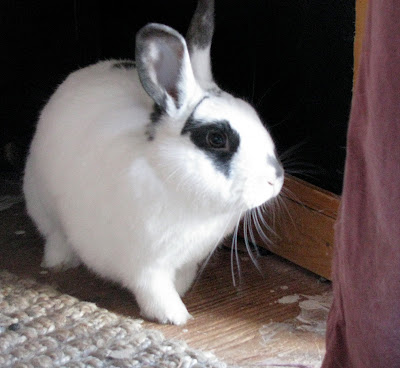 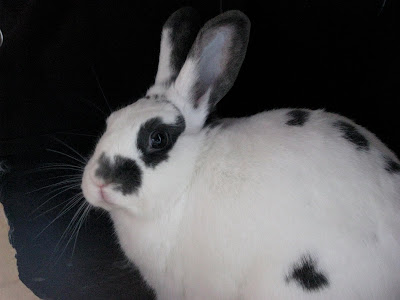 Which is my best side? That would be which ever one you are lucky enough to see.
On another front it was reported to me last week that there was a loose rabbit around the neighborhood. Although I looked here and there, I decided to let karma have her way in this situation. On Saturday morning this rabbit hopped down the driveway and into the backyard. I had a little chat with her, she let me pet and pick her up. It was raining, so she got a towel dry and has been living in a fenced in bathroom. She says her name is Harriet, she a dark agouti, very soft, very tame. The other rabbits have been pretty emotional since her arrival with a lot of chasing and such like. Interestingly there is less of an interest in her than there was in Amelia and there is not so much marking (not yet at any rate). I'm not sure if I'm up for having FOUR rabbits, but for the time being I think I can take it; one bun at a time. 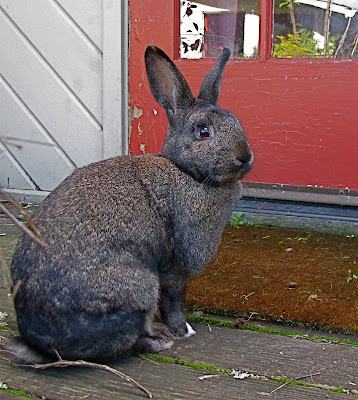 She's a little darker than this photo shows and her fur is in really good condition, not patchy like it looks here. Guess a week of rainwater rinses does something....
Have a really interesting week.
Posted by d. moll, l.ac. at 7:28 AM 25 comments:

It has started to rain heavily, some reports say it may be like this for a week. The reports are always changing. 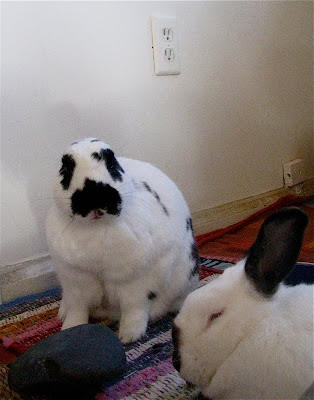 Sydney tried to amuse Amelia by telling her a ghost story about a rabbit who got it's ears removed by aliens who took them to a quite distant planet in another galaxy beyond the moon for further study of the miraculous properties of rabbit ears. 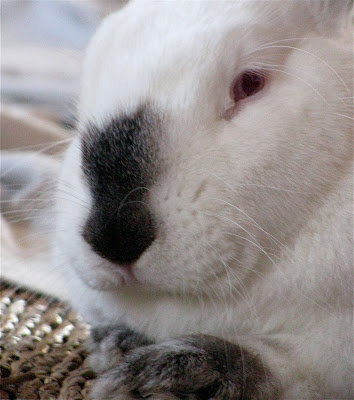 Labels: Amelia and Sydney, rabbit behavior, raining heavily
Newer Posts Older Posts Home
Subscribe to: Posts (Atom)
All content is copyright by Diana Moll, unless otherwise noted and may not be used in any way without permission, which you are very liable to receive if you just ask.