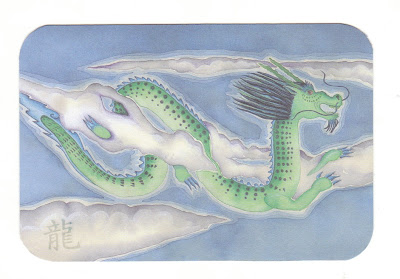 Dragon card from the year 2000 (watercolor and colored pencil)
For a several years I have done a card or print of the Chinese Zodiac animal representing that particular year. It's been 13 years now, with a few gaps. My very first was a year of the rabbit card. That design can still be had, the original cards having undergone surgery to remove their year and get a strong and artistically enhanced backing. The second year was a Dragon year. I never was very happy with the outcome. Dragons are tricky, partly because they're been done and done and done. Which is not to say there are not some very nice dragons to seen and had, but it's hard not to feel inhibited by everyone else's vision of this mythical and magical beast. It should be noted that there are two sorts of dragons, Western or European, and Asian. Western dragons are usually bad tempered hoarders, grumpy because they've ruined the Feng Shui of their caverns with too much treasure, and gotten a quantity of the stuff stuck between their belly scales. Asian dragons, which are the ones I am concerned with, are good and wonderful, if a bit showy and occasionally full of themselves, but then who can blame them; they've got it going on more than any other creature, probably because they are made of bits and bobs of other creatures. Dragons have the body of snake, scales of a carp, head of camel, mane of the lion, horns of a deer, eyes of a demon or rabbit, paws of a tiger, talons of an eagle, whiskers of a catfish, and the ears of a cow. Twelve years ago I tried very hard to be correct as to the ingredients of the dragon, but it felt contrived. This year, feeling blank and already defeated, I went out into nature to look for a dragon or two. Since the element of this year's dragon is water, the sea beckoned. There is a fine seaside walk at Wilder Ranch State Park. Since there is little or no supervision one can get quite close to the edge of the overlooking cliffs. It seems a very long way down to the water, especially, if, like me, you are afraid of heights. It's not a mental thing at all, being a afraid of heights, it's just plain physical. A feeling grabs you in the tailbone and tells you you are about to die. Although I knew I was not close to falling I felt like I was. I wondered if there was not something about the combination of water and height that might induce a person to jump, an irresistible siren call to the sea. Edging as close to the edge as I dared, much closer than I was comfortable with, I peered out and watched, watched the water, swishing, splashing, pulling back, diving under and leaping up again. I took many photos, hoping for any sort of dragonish breakthrough. My fear never receded, but I was at least not seized by the uncontrollable desire to jump to my death. 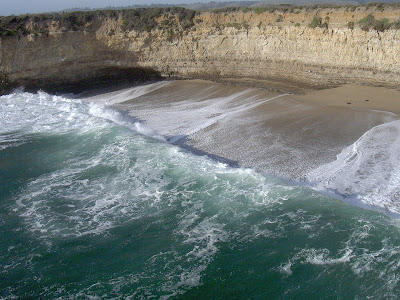 Pacific Ocean at Wilder Ranch State Park, Santa Cruz, CA
I returned home, exhilarated by my outdoor near death experience. Because I had a deadline, I hastily got to work and flung ink at paper resulting in some crazy inky dragons. They had some interesting bits, so in the spirit of dragon construction I took a brush stroke here and blob there, pasted, re-drew, cut and pasted again, until something Dragon happened. 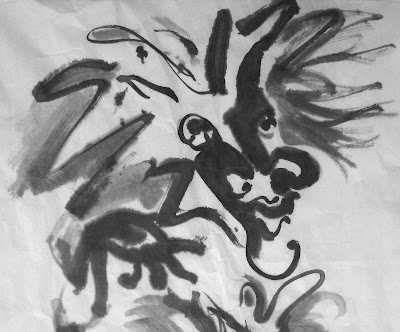 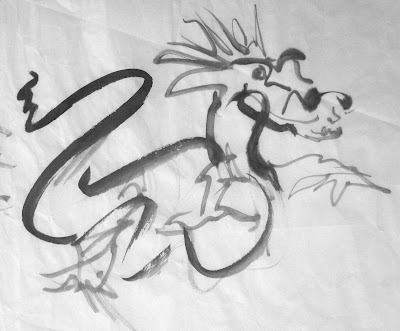 Another Crazy Inky Dragon
Water Dragon is unlike my usual work, if placed in a continuum it would seem out of place. Perhaps future art historians will declare it a forgery, or evidence of mental decline. Since I started printing I've wanted to show more paper, I wanted to get looser and simpler, but somehow I couldn't let go of color, of trying to be complex, until now. It is ironic, and therefore perhaps fitting, that the most complex and changeable of the animals, should turn out to be the simplest. 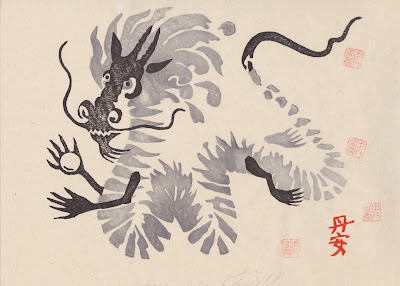 Water Dragon for 2012
If you go looking for a Water Dragon at my ETSY SHOP remember they are all a little different and there are three kinds of paper, so take your time. If your walls are too crowded to add a full sized dragon (his paper size is 13 x 10 inches in most cases), buy some little dragon postcards and send them out to seek their fortunes. If you want to wear a Water Dragon you can do that too by going HERE. To find out more about what the Dragon year may have in store for you, click HERE.
MAY YOUR YEAR OF THE DRAGON
BE TRULY AUSPICIOUS.
Posted by d. moll, l.ac. at 8:06 PM 14 comments:

CLICK
HERE
to
sign
a
petition
to
stop
it.
Independent
Artists
Selling
work
on-line
thank
you.
Posted by d. moll, l.ac. at 7:46 AM 9 comments:

I am trying again to make my bunnies happier than they are. Sydney has been chasing Harriet frequently, and pulling her fur, and chasing her away from food. Harriet has been completely good natured about it, but in general she is the bun odd out, except for the occasional grooming session by Tyler; she is alone in a group of three. For months Amelia and Sydney have been the only ones boxing through the fence, Harriet has given up violence for a more spiritual path, it would seem. If Harriet and Amelia could bond there would be less lonely buns about. Three bathtub dates were uneventful and I graduated them to a 4 x 4 pen in computer/gamer den. 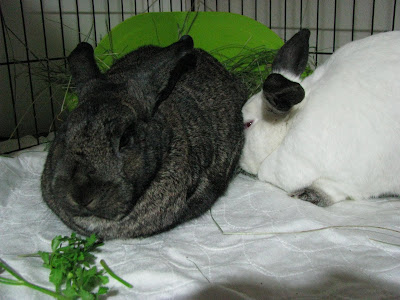 Amelia tries to get some attention, maybe she try the other end? 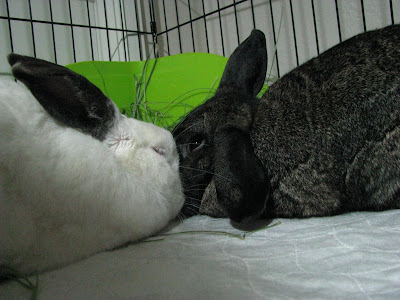 Ah, that's better, they are both requesting grooming, who will be the groomer? 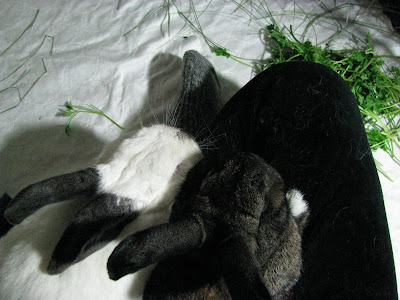 In an effort to create more bonding through safe stress, I pulled both big girls into my lap. They stayed for quite a while, Amelia popping up and out first for a snack. Harriet stayed for many more minutes, a warm pool of soft agouti fur. 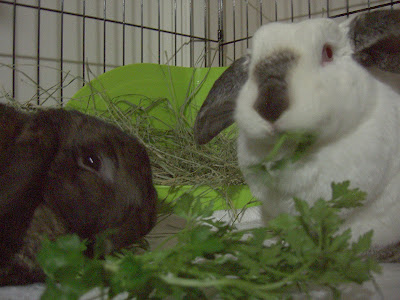 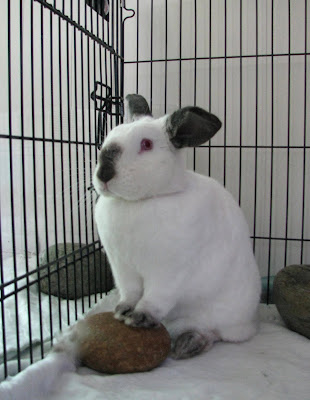 Amelia: First find a rock that wants to be your friend. After asking permission, place your front paws on your rock. Clear your mind and imagine your body is perfectly clear. I like to do alternate nostril breathing, but it's not critically important. Visualize your destination. 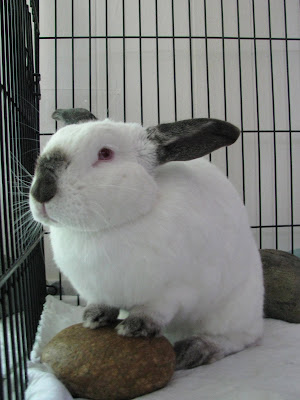 Amelia: Once you feel very certain in your mind regarding your destination, once you can almost feel it, taste it, smell it; lean forward until your ears are parallel with the ground. If you have prepared correctly you'll fly through the astral dimension to your destination. 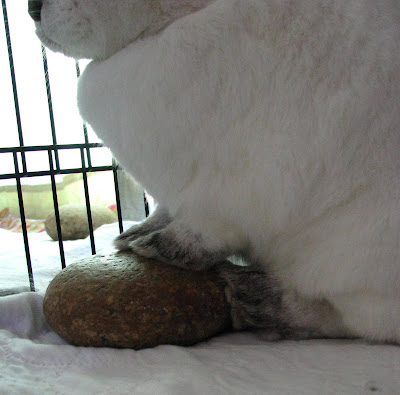 Amelia: You can stay at your original destination or tour around. When you are ready to come home, just touch your back feet to the rock. It's easy and fun, once you get the hang of it.
Posted by d. moll, l.ac. at 7:25 PM 18 comments:

Labels: Amelia, astral travel, rabbit behavior, rabbits and rocks, rabbits traveling the astral
Newer Posts Older Posts Home
Subscribe to: Posts (Atom)
All content is copyright by Diana Moll, unless otherwise noted and may not be used in any way without permission, which you are very liable to receive if you just ask.