Much more than a decade ago I was helping my parents pack up to move to a new apartment. I found, in several pieces in the back of a cupboard, a book friend I had spent many hours with as a child; The Animals' Conference. I loved this book for many reasons. First, it had belonged to my rather older brothers, and even had their names written in a crooked, blocky childish hand. I always wondered which brother had done the writing. Second, it was about animals, which were very popular both in literature and literally. Favorite books my parents read to me seemed to all be about animals: Freddy the Pig, Dr. Doolittle, Charlotte's Web, Minn of the Mississippi to name a few. The third reason I loved this book was because, curiously, my parents never read it to me. I thought of The Animals' Conference as my secret book and even conjectured that they couldn't read it, that it was only for the eyes of children. 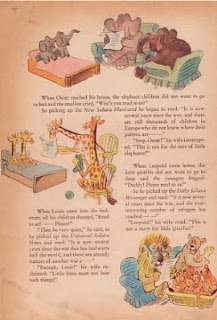 In the story the animals decide that humans are really making a mess of things what with wars, revolutions and famines, and some animals decide, for the sake of the human children, to do something about it. They call a conference to discuss the matter. Animals from all over the world are invited and travel thousands of miles using many interesting modes of transportation. They all stay at the Animal Skyscraper the biggest building in the world. Rooms are all specially customized for different animal needs.

A BETTER WORLD FOR THE CHILDREN becomes the slogan, but the humans just don't get it. The humans have a conference of their own, but get nowhere fast. The animals decide that the humans are not getting anything done because they are bogged down in paperwork, so millions of rats descend on the human conference and destroy the documents. The Military in general, the animals, decide is a problem, so they send moths to eat all the uniforms. This is embarrassing, but still the human conference cannot agree to get along. Finally the animals kidnap all the children, bringing them to a wonderful safe island where they play all day long with fun loving animals and pick tropical fruits from the trees. 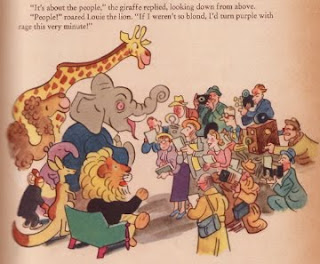 The disappearance of the children gets the notice of the humans at the conference and they sign a treaty brought to them by the animals. This singular document abolishes frontiers, disbands all armed forces and destroys ammunition, bureaucracy is trimmed to a bare minimum, child education is recognized as the most important and difficult work, teaching will be the best paid profession. Real education shall be to teach children true kindness of heart. 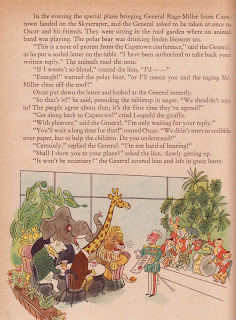 Copyrighted in 1949 in Switzerland, my copy is printed in Germany. The author Erich Kastner was a Pacifist, novelist and poet. You can read more about him HERE. The illustrator, and what wonderful illustrations! I wish I could show them all, is Walter Trier. Born in Prague, he was an anti-fascist who immigrated to England with the rise of Nazism. You can read more HERE.
I tell you the story as a shortened version resulting from my recent reading of this treasure. Had you asked me when I was a child what the book was about I would have said it's about how animals are smarter than people. 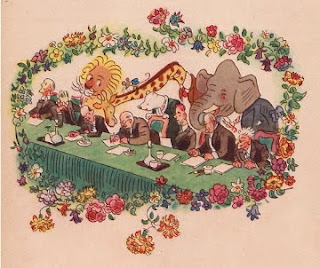 Epilogue: Since the book's recovery it has been rebound, all it's pages are snugged together and in the correct order. I did read it to my son several times and it is one of the few books I have that has not be chewed on by the rabbits. I have managed to keep this one safe, it's been through enough.
Posted by d. moll, l.ac. at 1:50 PM

Great post, And what a treasure that book is! Charlotte's Web was my all-time favorite (of course) I wanted to be Fern and hang out with the animals all day!

What an interesting story, and fun illustrations. Thanks for sharing this with us.

N-I thought it had been re-printed, but now a brief search sees so mention of it, as far as purchase goes...so it seems that used may be the most possible avenue.
S-OMG yes! And ALL the M. Henry horsey books, of course.
BG- You are welcome, I've been meaning to so this post for ever so long, but bunnies, you know bunnies, they seem to trump all.

Great post. I think I need to find a copy. I would have agreed with you as a child (and maybe today?): Animals are of course smarter than people.

I had no idea you had children!

What gorgeous illustrations - the colours are so of their time. Funnily enough, the bulk of my early childhood reading was dominated by animals - I would have loved this one.

What a great book!
Rabbits to trump all and yes...animals are smarter than humans.

Great story. My sister and I had a whole set of books - each about a different animal .. like Bennie the Badger etc. We would read them and read them. No paperbacks then. I wonder where they went. They were pretty stark actually, now that I think of it.

Amazing! When my parents moved out of state, they gave me all my childhood books. Except they weren't mine. My mother forgot that she bought them for my sister who was allowed to not share them. Thirty five years later I am allowed to read them. I find I have lost interest.

C-you don't need a book you life is full of strange and quirky stories :)
RG-and now you live in a house of animals. Yes, you did miss the BD, but so did the BF.
MM-it's a wonder it's not a re-print. I didn't write about it in a world historical context, but you can see that for yourself.
PG-yeah, the colors, if you didn't know the era you could guess it and but right.

Heart of a Cowgirl said...

Animals definitely ARE smarter than humans! What a great book and a treasure to keep, no doubt.

Heart of a Cowgirl said...

Animals definitely ARE smarter than humans! What a great book and a treasure to keep, no doubt.

Wonderful book and story. If there's one thing the children pick up from me is reading, the only place they are excited to go is the book store and they read a lot..way much more than I have time to. Glad the buns didn't manage to chew, keep it in the safe where you hide all your gold bars :P

What a fascinating book Diana! this is the first I have heard of it and considering the time it was written, and the author and illustrator's past, it's message is relevant indeed. Perhaps one day their wish will come true, I feel it may be sooner rather than later.